"Today, the [interior] ministers of the European Union unanimously agreed to establish a temporary protection mechanism in response to the influx of displaced people arriving from Ukraine". [1] With these words voiced by its interior minister, France, which currently presides over the EU Council, greeted the historical agreement to implement the 2001 European Directive on temporary protection for the very first time at the Justice and Home Affairs Council on 3 March. "This decision reflects the European Union’s full commitment to display its solidarity towards Ukraine and to fulfil its duty regarding the populations that are victims of this unjustifiable war", he added.

This protection mechanism whose activation was repeatedly requested by civil society for other groups of exiles - for Syrians in 2011, or Afghans in the summer of 2021 – had never previously been applied. [2] Moreover, since the start of the invasion of Ukraine by the Russian army, its neighbouring countries – like Poland, Hungary, Bulgaria – who, over the last few years, have enacted policies of exclusion and hostility towards exiles who tried to cross their borders, swiftly organised to welcome Ukrainians who were fleeing the war. Elsewhere in Europe, some states which, a very short time ago, criminalised the solidarity expressed by a part of their population towards people on the move, changed tack by encouraging it towards displaced Ukrainians.

Has Europe decided to put an end to the war against migrants that it has conducted for more than 30 years? It does not seem likely. Although these recent initiatives must be welcomed - the fleeing Ukrainian population must absolutely be given hospitality - they reveal the hypocrisy of European policy and national policies that practice a two-speed hospitality by continuing to operate a selection between "good" refugees and "bad" migrants in order to exclude and deny rights to people from the global South.

In fact, despite Polish government claims that "refugees fleeing war-torn Ukraine enter Poland regardless of their nationality", [3] there have been many testimonies by people of African, Asian and Middle Eastern origins who were residents in Ukraine that tell of racist and discriminatory practices that they have suffered at the hands of Polish and Ukrainian border guards. Hundreds of them have been blocked in railway stations or at borders, including women with their babies, when they crossed the border. Videos have circulated on social media, of people who waited in the freezing cold to be authorised to leave Ukrainian territory, at the same time as others had to go back on their steps or organise to collectively pass the barriers placed on their way. [4]

Despite these consistent testimonies, the Ukrainian border guards’ spokesman said: "I do not know what happened, these people may have been pushed back because they tried to jump the queue as people waited". [5] The French interior minister went so far as to state that "the Poles themselves have said that everyone was received in Poland and in the rest of the European Union", explaining that "the Polish ambassador [had] raised the fact that it was a Russian manoeuvre to lower the price of labour" enacted by that country’s authorities [6].

Both the border screening practices at EU borders and the temporary protection mechanism established at the time of the exodus by the population living in Ukraine are discriminatory, because they give rise to a choice to be made among people who need protection. [7] These practices that seek to limit the number of arrivals by citizens from the global South are marked by continuity with the racist policy of the EU and its member states over the last few decades.

In fact, only a few months ago, Polish authorities erected barbed wire fencing and walls at the Belarusian border, as the sole response to the arrival of women, men and children who came from countries like Yemen, Afghanistan, Syria, Iraq or the Democratic Republic of Congo among others, using the pretext that they were "migrants" instrumentalised by the Belarusian head of state.

Only a short time earlier, after the Taliban took power in Kabul, the European countries that are now "welcoming" organised to close their borders to the thousands of people who sought to flee Afghanistan by claiming, like France also did, that "on its own, Europe cannot resolve the consequences of the current situation [and that] we must predict and protect ourselves from substantial irregular migration flows". [8]

What the inconsistent discourses and practices that we witness today fail to conceal has a name: racism, that is, a belief in a hierarchy among human beings and the production of a relationship of domination to operationalise this hierarchisation. Racist ideology is most often concealed behind presentable propositions through cunning ideas like "These people’s place is where they’re from, to help their countries to move out of poverty", "they must be received by neighbouring countries in the South, where the dominant culture is closer to theirs…", or even, "by migrating, they place themselves in danger and become preys for smugglers". However, it reappears in its real guise in times of crisis, when alarmist discourses resurface which, among political authorities and some of the media, fan the fears of an invasion.

To comment on the EU’s decision to activate the temporary protection mechanism, the European Internal Affairs Commissioner, Ylva Johansson, speaks of a "paradigm shift", and we are pleased to hear the media state that Europeans have found their "sense of hospitality" again. [9] However, as we can see today, this means forgetting that the legitimacy of people’s suffering is measured on the basis of their origins and skin tone.

People on the move have mobilised for months to uphold their right to protection and to leave a country where their life is in danger, without seeing this hospitality materialise. From the perspective of those caught along the Balkan route, [10] blocked in southern Tunisia, [11] or even in Libya, who are no fools: "They say that Ukrainians are different, that they are IT programmers and they have a well known history, unlike Africans whose past is marked by poverty. Ukrainians are now welcomed in countries that closed their gates to refugees from the Middle East and Africa". [12] Although we express all our solidarity with the Ukrainian exiles, we join our voices to those of all the people who are blocked and knowingly kept at a distance from European borders.

Today, the EU is doing for Ukrainian exiles what it has long claimed was impossible: to allow the mobility of people seeking refuge and recognition of their rights, rather than trying to block them at any cost. This breach that has opened due to an exceptional mobilisation by member states shows that, contrary to what it has always argued, the EU has a capacity to welcome a very large number of exiles. The Migreurop network calls for this surge of solidarity to be extended to all people, regardless of their origin, nationality, skin tone, class, etc.

Only freedom of movement for all could put an end to a global apartheid that is being imposed through borders. 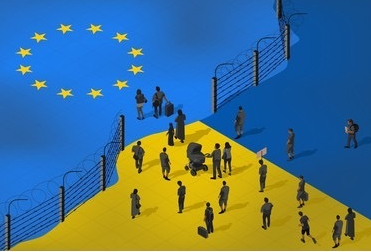 [2] ICMPD, The war in Ukraine and the renaissance of temporary protection - why this might be the only way to go, 2 March 2022 ; GISTI, Open letter to the President on the reception of refugees and migrants in France and Europe, 10 September 2015.

[7] Council Implementing Decision (EU) 2022/382 of 4 March 2022 establishing the existence of a mass influx of displaced persons from Ukraine within the meaning of Article 5 of Directive 2001/55/EC, and having the effect of introducing temporary protection.

[11] Migreurop, When the UNHCR in Tunisia throws refugees on the streets like rubbish, 18 February 2022.

[12] The civil fleet Solidarity is not a crime, Refugees in Libya highlight injustice of EU opening up borders to white people but not them, 27 February 2022.