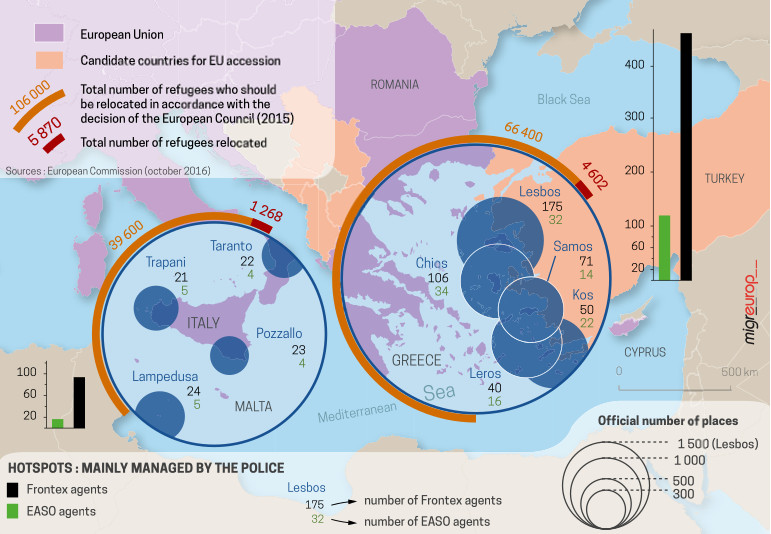 Presented in the European Agenda on Migration, launched in May 2015 by the European Commission as being the EU face of solidarity to the inappropriately named “migration crisis”, relocation consists of dividing up among different member states migrants identified in Greek and Italian hotspots as eligible for refugee status. After the Commission decided not to make this measure binding (many states having refused to accept the “quotas” imposed upon them), 23 countries committed “on a voluntary basis” in September 2015 and after interminable haggling, to take in a total of 160,000 potential refugees over two years. This is a ridiculously low figure given the number of people already present at the time in Greece and Italy. It should be noted that among the criteria to determine how many migrants would be relocated in each host country (number of inhabitants, GDP, number of refugees already received, unemployment rate…), the refugee’s choice of destination was never taken into account. This serves as a reminder that even though their right to request protection is recognized, asylum seekers are still forbidden to circulate freely in the EU.

One year after the introduction of this measure, approximately 6,000 refugees have been “relocated” to a European country, although some countries have only accepted a few dozens, or none at all [see map above]. This serves to show, as if it were needed, the failure of a mechanism established only to make hotspots appear humane and rational. These hotspots are in fact compulsory crossing points to have a chance of being selected for transfer to a host country. But an extremely slim chance since firstly, this applies to few nationalities (principally Syrians and Eritreans), and secondly, European countries are in no hurry to honor the commitments they have reluctantly signed up to, and finally, because the selection process is complicated and bureaucratic. The vast majority of migrants, i.e. those who are not selected for relocation, are therefore doomed to be deported or trapped in Greece or Italy. In the case of Greece, this also depends on whether the exiles arrived before the enforcement of the EU-Turkey agreement, according to which even those eligible for asylum can be pushed back. Based on the illusory prospect of relocation, thousands of exiles have become the hostages of the “hotspot approach”, which aims, first and foremost, to sort, register, marginalize and possibly deport men and women that Europe has refused to “host”.