At the end of 2016, Italy – supported by the EU – initiated a dual strategy to put an end to migrant arrivals from the central Mediterranean: criminalize the rescue of people, and once again make Libya Europe’s policeman. Both dimensions became more pronounced during the summer of 2017, with the imposition of a "code of conduct" on NGOs and the sequestration of vessels of recalcitrant organizations who did not sign up to the code. At the same time, Italian military ships were deployed in Libyan territorial waters of Libya, which unilaterally declared its search and rescue area (SAR) prohibited to unauthorized foreign vessels, particularly those of NGOs.

Over the past few days, this dual strategy has taken a new step. On 15 March 2018, the Spanish rescue NGO’s Proactiva Open Arms conducted several rescue operations in international waters off the Libyan coast. The NGO was then contacted by Tripoli coastguards, who ordered that the rescued migrants should be transferred to one of their ships. Aware of the deprivation of liberty and the abuse experienced by boat people returned to Libya, the crew of Proactiva Open Arms refused to deliver them. After several hours of high tension, during which the Libyan coastguard, weapons in hand, threatened the crew of the Proactiva Open Arms, they finally withdrew.

The Spanish NGO then headed to Italy to urgently disembark the 216 rescued people and was ordered to disembark them at Pozzallo (Italy), for them to be taken to the hotspot (sorting center at the external border of Europe). On 19 March, the prosecutor in Catania ordered that the boat should remain in the port and proceeded to seize it. Following the NGO’s refusal to hand over the rescued people to the Libyan coastguard, an investigation has been opened and three members of the crew are allegedly being prosecuted for "criminal association to facilitate illegal immigration."

If the sea rescue NGOs are so troublesome, it is because they are the last barrier to the Libyan Coast Guard intercepting migrants with impunity, and thus allow them to testify to the fate of those who escape the hell of Libya. European leaders, by financing [1], equipping, and coordinating the activities of the Libyan Coast Guard to return the intercepted individuals to abuses that some European leaders themselves have hypocritically described as "crimes against humanity" [2], they become accomplices.

It is to try to stop this policy that Migreurop, EuroMed Rights and the International Federation for Human Rights defend respect for international law (including the right of asylum) and freedom of movement for all (including the right to leave any country, including one’s own – Article 13 of the Universal Declaration of Human Rights), and support those accused of crimes of solidarity. 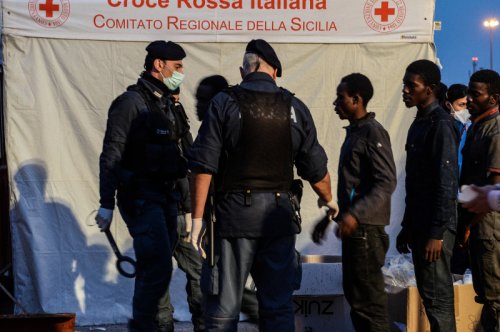 [1] In 2017, 162 million euros were allocated to the Libyan authorities under the Trust Fund, mainly from the European Development Fund and the Italian Defence Budget, and more than 5,000 people lost their lives on the Mediterranean route for lack of access to European territory