« The answer is clear, and the rejection is definite… We do not have the adequate capabilities and abilities to establish accommodation centers » [1]. With these words, Mr. Taher Cherif, the Tunisian Ambassador to the European Union, expressed the rejection of Tunisia to establish camps within its territory to receive and “assemble” migrants that the European Union refuses to take. This rejection was in response to the European Commission’s proposal to create a “Landing Platform” in North Africa for migrants rescued in international waters and whose the European countries have not reached an agreement on how to ensure receiving and sheltering them, noting that the Italian authorities have previously emphasized the closure of their borders and their definite refusal to accommodate them. Notwithstanding the final Tunisian, and various other African countries, rejection of the EU Commission’s plan, and its continuous affirmation that it will not play any role in monitoring and supervising the EU borders, it has for a long time adopted many measures to monitor sub-Saharan migrants [2] on its territory. It is apparent that the European Union, after the failure of its regional approach to the launch of landing platforms, is imposing separate and gradual measures to control migration, in which Tunisia is seemingly a distinguished candidate for the implementation of these measures. Along with the further deterioration of the situation in Libya, [3], the latter has become a target for the enactment of the European strategy and tactic to close the borders, as it has also, gradually, met all the requirements to turn it into a migration control area.

Although Tunisia appears to be a better option than Libya in terms of receiving this migrant category, migrants’ experiences approve otherwise. “It is impossible to live in Tunisia anymore… I must return to Libya”. This idea has been haunting the minds of various migrants since the beginning of 2020, despite their influx to Tunisia seeking shelter after the harsh experiences they have gone through in Libya. The situation in Libya is deteriorating day after day, so how can one explain the desire of hundreds of migrants, and even thousands, to leave a safe and hospitable country (to a certain degree) [4], to go to a chaotic and precarious one? This study on the policies of migration management in Tunisia, which lasts for three months, was based on this interrogation and the recurrent observation of the "non-reception" of migrants on the Tunisian soil.

The report intends to document non-reception policies and place them in a broader context, a context of border closure policies adopted by European Union countries, and seeks to emphasize how these policies merge both the humanitarian and security contexts of Tunisia.

This report was conducted between October and December 2019 in partnership between the Tunisian Forum for Economic and Social Rights and the African-European Associations Network Migreurop. This report adopted more than 90 interviews with migrants (35 interviews with migrants based in Tunisia representing 16 different nationalities) and representatives of local and international organizations and bodies, as well as researchers and journalists. 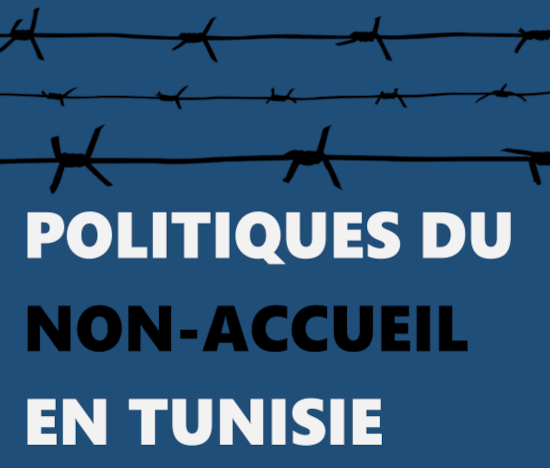