393. This is the number of closed camps detaining migrants that appear on the closethecamps.org website launched today. These camps have all been in use between 2011 and 2013, and are located in the European Union’s (EU) countries, in accessing countries which have applied for membership to the EU, in those that qualify for the European Neighbourhood Policy (ENP) and in some of those which participate in the European migration policies.

These figures only reflect detention in close camps [1] - i.e. sites where migrants are totally deprived of liberty. These places are emblematic of the numerous human rights violations migrants are facing.

For over a decade, Migreurop has systematised data collection and has documented that phenomenon. The network is especially using maps to cast light to this complex and diverse reality, to raise awareness of these questions and reach the widest audience possible. The “Encampment Map”, the updated fifth version of which was published in 2012, is a useful tool to illustrate the development, both in nature and in numbers, of detention sites for migrants.

Beyond the collection and dissemination of information, Migreurop aims to mobilise all those who oppose mechanisms that result in the detention and the removal of migrants, to defend their fundamental rights.

The Open Access Now campaign, launched in 2011, and that calls for unconditional access for civil society members and for journalists to immigration detention centres, has helped emphasise and recall that opacity keeps surrounding these detention sites: obstacles faced by NGOs, researchers, families and friends of migrants, citizens to access information, difficulty to contact detainees, obstruction to supportive actions and to some awareness and advocacy campaigns on these matters.

Faced with this reality, the Migreurop network has decided to set up a database and a “Dynamic mapping of the detention of migrants.” This collaborative project aims to facilitate access to information on immigration detention and its consequences on the life and the rights of migrants. This ambitious enterprise was presented publicly on 6 December 2013 in the framework of the international meeting entitled “Detention of migrants in Europe and beyond: what perspective?” held in Paris by Migreurop and the Observatory on the Detention of Migrants (Observatoire de l’Enfermement des Etrangers – OEE, France).

Today, the network is launching this website, in the broader context of the AntiAtlas of borders project, which is organising an exhibition at the Compagnie, Marseille (France), between 13 December 2013 and 1 March 2014. It is hopeful that contributions will be many to feed in this initiative against the “Europe of camps”. 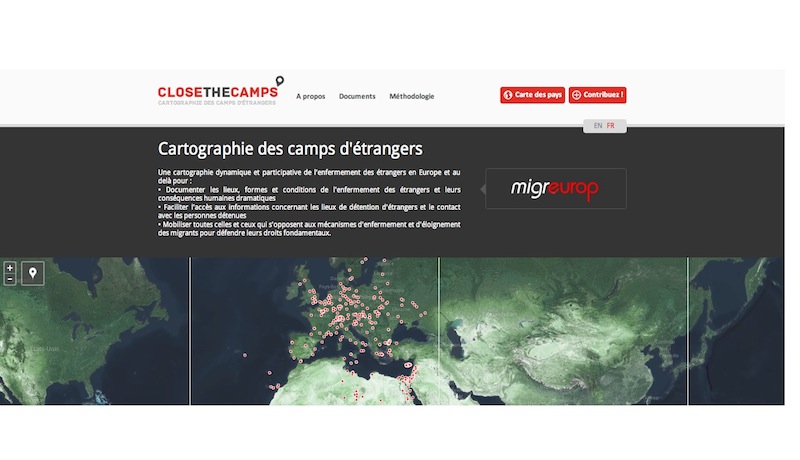 [1] The detention of migrants can also occur in « open » sites that follow the same logic geared towards administrative and social control (see Migreurop brief on the detention of migrants). Although the network has always brought forward a large typology of the notion of “camps”, only closed camps have been taken into account so far in Migreurop’s database on which most of the maps available on the website are based.