A favoured tool of immigration and asylum management, migrant detention continue to expand within the European Union but also at its southern and eastern borders. Inhumane and degrading treatment occurs on a daily basis as a direct consequence of the policies and practices implemented in Europe. Yet these rights violations remain mostly hidden, as everything is designed to keep immigration detention centres and the detainees away from civil society and the media.

The campaign of visits we organised between 26 March and 26 April 2012 demonstrated yet again the clear intention on the part of the authorities to control, if not prevent, any external scrutiny .

Following a question by seven MEPs in March 2013 on “the access of non-governmental organisations (NGOs) and the media to detention centres and their right to information", the European Commission has recently declared that "the repeated refusal to visit detention facilities without objective justification would undermine the right of NGOs enshrined in Article 16 (4) [of the EU Returns Directive], and could be considered as an infringement ".

A campaign of parliamentary visits was launched on 24 April 2013 at the European Parliament to support the demands of the Open Access campaign. Several MEPs undertook visits in order to increase public attention, to highlight the need for transparency and to allow more visibility and public awareness of the problems linked to the detention of migrants. These visits aim to push European and national legislation to towards a greater respect for human rights.

States tend to prevent journalists from entering these centres and establish very restrictive rules regarding NGOs access. Even MPs are sometimes limited in their ability to enter these facilities. This year’s campaign has been no exception and its outcomes have been far from satisfactory. Inadequate excuses and lack of answers demonstrate a will on the part of States to keep immigration detention out of the public eye.

In France, on 13 May, Hélène Flautre (MEP - Green Party, France) undertook a single visit to the detention centre in Mesnil-Amelot. The two journalists who accompanied her were not allowed in. In Mesnil, the lack of understanding on the part of the migrants regarding their own detention was palpable and the dilapidation of the facilities, despite being relatively recent, was particularly worrying. Most disturbing remains the expulsion of sick migrants and the difficulties associated with contesting the validity of their deprivation of liberty . Similarly, on 28 June 2013, upon the decision of the Interior Minister, two journalists were refused access to the Marseilles detention centre. Marie-Christine Vergiat (MEP - GUE/NGL, France) and Senate member Isabelle Pasquet (CRC, Bouches du Rhône) had to enter the Marseille Canet centre alone . This centre has been the stage of several incidents, including a fire in March 2011 and the hospitalisation of a migrant in a critical condition in July 2012. There is no free access to water fountains and the practice of isolation for medical reasons is frequently used with no recourse to consultation by a doctor, including in psychiatric cases. On 4 June 2013 the Ministry of the Interior declared that it would become possible for journalists to access immigration detention facilities. Concrete modalities of this access have not been announced yet and the fact that several journalists have recently been prevented from entering detention centres seems to contradict this statement. On 16 July 2013, Sylvie Guillaume (MEP - SD, France) will visit the detention centre in Lyon. She will also attempt to bring journalists with her.

In Spain, on 10 May 2013, NGOs and journalists could not enter the Aluche detention centre for foreigners (CIE) in Madrid. Entry was only granted to political representatives Raül Romeva i Rueda (MEP - Green Party, Spain), Ska Keller (MEP - Green Party, Germany), Ulrike Lunacek (MEP - Green Party, Austria) and the independent MP Mauricio Valiente (Madrid IU). Only one NGO representative was allowed to enter the facility but he refused to do so alone in order to denounce the manner in which access was granted and to support the other NGO representatives and the numerous journalists who were left out. At the Barcelona CIE, during a visit on 28 June, several MPs were allowed in in: Carmen Romero Lopez (MEP - GUE, Spain), Dolos Camats i Luis (MP - independent, ICV-EUiA), Gemma Calvet Barot (MP - independent, ERC) and David Fernandez i Ramos (MP - independent, CUP). All media were refused access, however. These detention centres have already been the target of various criticism regarding abuses perpetrated against detained migrants. Opacity continues despite a decision on 27 June 2013 by the “supervision judge” of Barcelona CIE to grant NGOs and lawyers the right to access detention facilities .

In Italy, in order to prevent NGOs from accessing five airports, the Interior Minister declared that migrants waiting to be pushed-back are ‘hosted’ at the facilities of the border police for the duration required to implement the ”refoulement”. The minister then claimed these facilities did not constitute detention places and that the right of NGOs to see the migrants did not apply. However, it is undeniable that migrants are deprived of their freedom and that these facilities operate in the same way as other detention centres. Eventually, three airports will be visited in Rome, Palermo and Bari, but only by MPs, since it is not possible for civil society organisations to do so within the current interpretation of the law by the Italian authorities. Monitoring of the "Identification and Expulsion Centres" (CIE) as part of the national campaign "LasciateCIEntrare" continues. Participants include lawyers, journalists, representatives of civil society and, more recently, regional and municipal councillors. A visit by the Chairman of the Special Commission for Human Rights of the Senate to the center of Ponte Galeria (Rome), Italy’s largest in terms of capacity (360 places), is expected in the coming days. The campaign is also opposed to the reopening of the CIEs of Santa Maria Capua Vetere (Caserta) and Palazzo San Gervasio (Potenza), closed in 2011.

In Belgium, Marie-Christine Vergiat had asked to visit the ‘closed centre’ in Bruges on 20 June 2013, together with a journalist of RTBF (Belgium francophone radio and television). The Foreigners’ Bureau (‘Office des Étrangers’) refused her request to go with the media. She therefore had to go in on her own. The atmosphere and management style of this centre is particularly prison-like; migrants do not have any privacy and have to remain in collective spaces all day long and sleep in small dormitories for 20 people. Families are kept separated.

Beside the issue of accessing immigration detention centres, following the visits organised in 2009 , 2011 and 2012 , what is clear is that the situation in these centres remains essentially the same and is characterised by conditions similar to those found in prisons. There are regular infringements on fundamental rights around access to medical treatment, making an asylum claim, obtaining legal support and having a judge supervise the decision to detain.

In Lebanon, Migreurop has asked to visit two prisons (Roumieh and Zahl) and a police station (Adlieh) where many migrants are being detained. The organisation is still waiting for a reply. There is a lot at stake in Lebanon. According to statistics from the Ministry of Justice, in 2012, 10% of the total number of detainees in Lebanese prisons were imprisoned because they had entered or stayed illegally in the country. In 2011, Roumieh prison saw violent revolts taking place inside the facility. Detention conditions are harsh in particular due to prison overcrowding (about 2,400 detainees in a facility designed for 1,300 people). Migreurop also wishes to visit the Zahle women’s prison in order to assess the conditions and specific problems facing migrant women in prison. Moreover, hundreds of so-called illegal migrants are detained in a police station in the heart of Beirut, which is being used as a long-term detention centre against the law. 500 to 600 people are crammed in small cells under a bridge for weeks, sometimes months, without natural night and fresh air, while return and deportation formalities are being processed. Detention conditions are appalling and lawyers, civil society and journalists are almost entirely forbidden to enter. Other visits are planed in July and September in these countries as well as in Germany, Cyprus and Bulgaria.

A detailed report on this new campaign of visits, with details both of how much access was possible and of detention conditions, will be published in September. 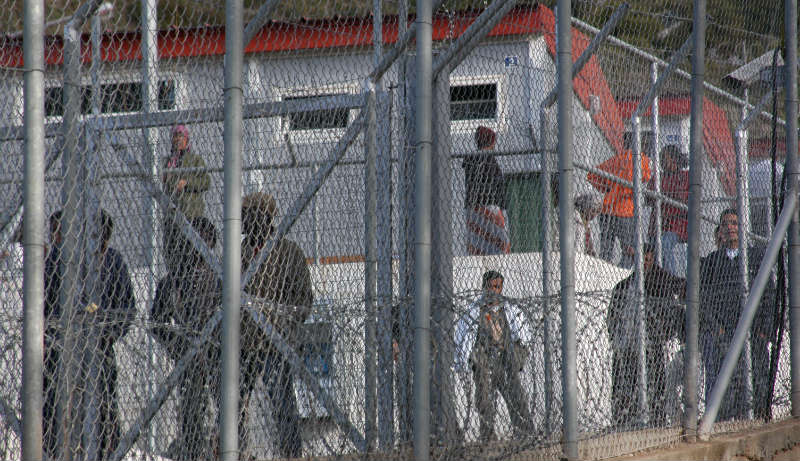