Survivors from a group of 40 illegal immigrants have accused the Greek coastguard of throwing them into the sea off the Turkish coast. Six people drowned and the rescued immigrants claim three others are missing.

The migrants from the Middle East and North Africa say they boarded a boat in the Turkish province of Izmir and headed for Greece, according to the Turkish coastguard.

"Greek security forces threw us into the sea from a coastguard boat without even asking whether we knew how to swim," Muhammedi Alti, a Lebanese national, was quoted as saying.

Alti said he had been trying to flee last month’s war in Lebanon and paid smugglers to take him to the Greek island of Chios. The Greek troops on the island captured the migrants, put them on a boat and dumped them in the water near the Turkish port of Karaburun, according to Alti. "I still can’t believe what we have lived through. We managed to swim to the shore with my wife," said Alti. "We had thought that human rights would be more valuable in Europe."

The Greek foreign and merchant marine ministries said they had no knowledge of the incident, which allegedly occurred on Tuesday. "We never follow such practices," a merchant marine ministry official said. " When the coastguard prevents a vessel with illegal immigrants from entering Greek waters they call the Turkish coastguard to escort it back."

The Turkish coastguard said it was not contacted by the Greek coastguard and launched a rescue operation after residents on the Turkish coast heard cries for help coming from the sea. Turkey’s coastguard said it recovered the bodies of six people and rescued 31 others. A search for three more missing people was under way, it said. The migrants included Palestinians, Lebanese, Tunisians, Iraqis and one Algerian.

Rear Admiral Can Erenoglu, commander of Turkish coastguard, said that no vessel was spotted at the scene of Tuesday’s sea rescue. Erenoglu claimed that his officers had witnessed the Greek coastguard abandoning illegal immigrants at sea on two previous occasions, once earlier this year and again in 2004. 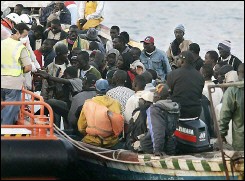