The number of failed asylum seekers who cannot be removed is soaring by a quarter, piling yet more pressure on taxpayers.

An average of 21 so-called "hard cases" a day were approved for support in the first three months of this year, compared with 17 a day during 2006. If that rate continues, it will cost taxpayers 75million a year.

In an added farce, dozens of failed asylum seekers and illegal immigrants are escaping removal every month by just refusing to get on a plane.

TaxPayers’ Alliance campaign director Blair Gibbs said: "Even the Home Office’s pitiful attempts to deport or remove a few hundred illegal migrants or failed asylum seekers a month seem to be too much for them. Any system for removal needs to prepare for people playing games to avoid being put on a plane home. Our system is slow, expensive and exploited every day by those who seem to have learnt how to play it."

A total of 1,895 failed asylum seekers were granted support in the first quarter of 2007 because they cannot be sent home, or they are fighting their cases. They are known as "hard cases" because they have had asylum applications turned down, but for one reason or another it is not possible to return them.

That can be because of medical reasons, or there is no "viable route" home, or they have taken their cases to judicial review. A total of 6,445 failed applicants were given the support during 2006 — an average of 17 a day. 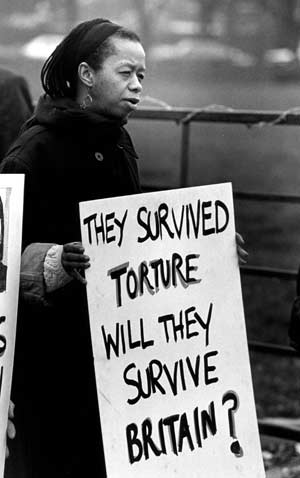