The government wants to bring in compulsory ID cards carrying fingerprint, iris and face-recognition technology from 2008, claiming they are essential in the fight against terrorism, serious organised crime and illegal immigration. Experts say the technology involved make it the most ambitious projects of its kind and also one of the world’s largest IT schemes.

However critics say the cards will be an infringement on civil rights and will be a costly, ineffective white elephant.

In its report on Friday, the parliamentary Science and Technology Committee criticised the government saying it had failed to address many problems surrounding the scheme.

“There is not the level of confidence in this scheme that could be expected at this stage,” Phil Willis, the committee’s chairman said.

“Despite their vested interests in the scheme, industrial representatives are speaking openly about their concerns regarding the identity cards programme - this should set alarm bells in the Home Office ringing.”

Last month newspapers published leaked emails from senior civil servants expressing doubts about the feasibility of the scheme, which could cost as much as 19 billion pounds according to one report by academics.

The Home Office denied the scheme was in jeopardy but did admit the timesecale for its introduction could be delayed.

The Science Committee report said there was a lack of clarity about how the cards would be used, what data would be needed for different scenarios, and how the procurement process would work.

“Too many aspects of the identity cards programme are unclear,” Willis said.

“As a matter of urgency and to increase public confidence, the Home Office must give a clearer idea of what identity cards will be used for if the right technology is to be put in place.”

Any failure to bring in the cards would be a huge embarrassment for Blair who remains a determined supporter.

"Don’t be under any doubt at all that (the scheme) goes forward,” Blair told reporters on Thursday. “Whatever adjustments are made because of technical issues to do with the technology or introducing it ......will be a major plank of the Labour Party’s manifesto at the next election". “If people want to track illegal migration and organised crime in this country you’ve got to have identity cards.”

However, the opposition Conservatives said the report was a “shocking indictment” of a scheme in “shambles”. "It beggars belief that the government is prepared to waste 19 billion pounds of taxpayers’ money on this plastic poll tax when the project is already in such dire straits," said Conservative home affairs spokesman David Davis.

Under the plans, Britons applying for or renewing passports after 2008 would be given an ID card and their biometric details put on a national register. It would see Britons issued with ID cards for the first time since they were abolished after World War Two. ID cards are used in about a dozen European Union countries but are not always compulsory and do not carry as much data as those planned for Britain. 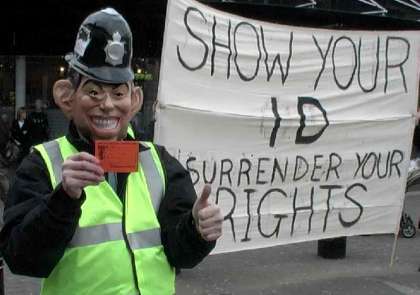