The psychological effects of Britain’s policy of locking up asylum-seekers were demonstrated yesterday at an inquest into the death of an Angolan man who took his life so that his teenage son might stay in Britain.

The inquest jury hearing the case of Manuel Bravo watched images from CCTV cameras at the Yarl’s Wood detention centre in Bedfordshire that showed him leaving his room and hanging himself in a stairwell. His last words to his 13-year-old son Antonio, who shared his room at Yarl’s Wood where they had been moved together 12 hours earlier, had been: "Be brave. Work hard. Do well at school."

Mr Bravo, whose case was highlighted by The Independent last year, had walked into a library in Leeds, five months before his death, and typed out a signed declaration of intent. "I want to die or kill myself as I don’t have any chances," he wrote. "If I die I would like my son to stay with the Government, or NSPCC, or youth protection in the UK." He did not pass the note, discovered after his death, to friends.

Within hours of his removal to Yarl’s Wood, Mr Bravo was composing a suicide note. "I do not have a life any more," he wrote. "My son Antonio is to stay here in the UK to continue his education. Antonio, I do not want you to go back to Angola to suffer."

The inquest, at Bedford coroner’s court, asked questions of Yarl’s Wood’s capacity to deal with individuals such as Mr Bravo. He was not considered a suicide risk, despite arriving at the centre with a rolled-up coil of washing line cord in his bag and a medical record which revealed he had been on antidepressants, prescribed by a Leeds GP, for months. He told custody officers that the cord was for "his own protection" and they removed it, not thinking to mention it to the centre’s nurse, who later interviewed the father and son together. The nurse told the inquest she would not have taken Mr Bravo’s explanation for the cord at "face value" and that it might have affected the way she assessed his state of mind.

Since Mr Bravo’s death, detainees and their children have been interviewed separately by medical staff. There is also more rigorous scrutiny of CCTV cameras.

Mr Bravo and his wife, Lydis, had arrived in Britain in 2001 with Antonio and another son, Mellyu. Mr Bravo said his father had been a leader of the Association of the Youth Democracy (AJDB), founded in 1998 to challenge President José Eduardo dos Santos’s regime. He claimed his parents had been murdered and his sisters raped.

Mr Bravo’s plea for asylum was rejected and his appeal was chaotic. His lawyer failed to show up and he was forced to represent himself, using pidgin English. He was told to expect the result of his appeal within a month but it did not arrive, despite the efforts of a local vicar, the Rev Alistair Kaye.

In what is known in immigration service parlance as a "pastoral visit", a Leeds immigration officer, Dave Baker, called at the Bravos’ Leeds terrace on 13 September last year to check on their presence. Mr Baker gave no hint of the Bravos’ imminent fate and even offered to help with the missing appeal result. But the following day at 6.10am he was back with five police officers, who secured entry to the house with a battering ram.

Colin Hutchinson, representing the Bravo family, put it to Mr Baker: "A ’pastoral visit’ means casing the place before moving in to make the snatch, doesn’t it?", a suggestion that Mr Baker rejected. The appeal result arrived on the day of Mr Bravo’s death.

The jury returned a verdict that Mr Bravo had killed himself "in the belief that, in doing so, he would secure his son’s future in this country".

Tim Finch, director at the Refugee Council, said afterwards: "This totally heartbreaking case is not an isolated one. These cases show the level of desperation of people in these centres. They have not committed any crime. There is no evidence they will abscond and they could be kept track of in the community."

Antonio has been granted five years’ leave to remain in Britain and been placed with a foster family in Leeds.

The troubled history of Yarl’s Wood

– November 2001: The £100m centre, the biggest in Europe at the time, opened in Bedfordshire but was soon dogged with allegations of racism and brutality. Global Solutions UK Ltd (GSL) - a division of Group 4 - insisted staff were conscientious and professional.

– February 2002: A riot, the worst at a detention centre for 16 years, broke out and a fire destroyed half the centre, causing £40m of damage.

– November 2004: The Government’s "ambitious and unachievable" policy of doubling deportations of failed asylum-seekers was blamed for the riot and fire according to an inquiry report. It said the mishandling of a female detainee triggered the disturbance.

– June 2005: Zimbabwean women at the centre went on hunger strike in protest at their imminent deportation.

– July 2005: More than 30 Ugandan women went on hunger strike asking for their asylum claims to be reconsidered and protesting at conditions, particularly lack of health care. One mother described having to live with her six-year-old son in a room so small it felt like a cage.

– July 2005: Ann Owers, the chief inspector of prisons, reported that children at Yarl’s Wood were being "damaged" by their experience. Inspectors found a five-year-old autistic girl was so badly neglected she had not eaten properly for four days.

– December 2005: Al Aynsley-Green, the children’s commissioner for England, issued a report saying that children at the centre were being denied basic rights, kept in prison-like conditions, fed junk food and deprived of proper play facilities.

– March 2006: Campaign groups including the Refugee Council and Save the Children described the policy of detaining children, mostly at Yarl’s Wood, as inhumane. Many were left suffering depression, nightmares and eating problems. 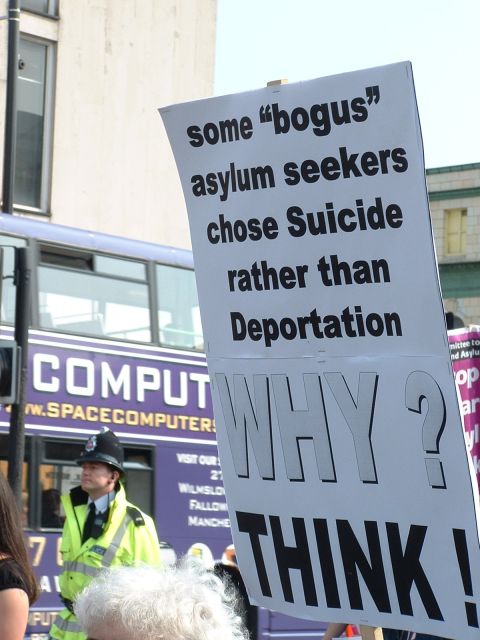