Intending Pakistani asylum seekers eying the UK would be better advised to read the latest Amnesty International and Refugee Action study published here on Tuesday before they take the plunge.

Describing the plight of thousands of rejected asylum seekers in Britain, the study by Amnesty International and Refugee Action says the government has abandoned them and now they are sleeping in parks, public toilets, telephone boxes and churches, leading to record levels of destitution across the country.

The study found that a growing number of failed asylum seekers are remaining in the UK without any financial or medical support.

Writing in Tuesday’s Guardian [see below], representatives of nine of the UK’s leading charities said this had led to widespread poverty, with thousands of people being “left without a roof over their heads and without food to eat”.

The newspaper quoted Kate Allen, director of Amnesty UK, as saying that the government was deliberately using destitution in an attempt to drive refused asylum seekers out of Britain.

“Forcing people into destitution as an attempt to drive them out of the country is backfiring badly and vulnerable people are suffering. Refused asylum seekers are being reduced to penniless poverty - forced to sleep in parks, public toilets and phone boxes, to go without vital medicines even after suffering torture, and to relying on the charity of friends or drop-in shelters to survive,” he said.

Asylum seekers’ support is cut off 21 days after a final refusal is made on their claim, and although there is limited support available after that point, people have to agree to return to their country of origin to access it.

However, the report says that many failed asylum seekers are unable to return. 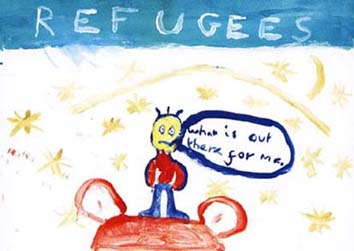