Call for the closure of camps for migrants, in Europe and beyond

In member states of the European Union, as well as in neighboring countries (Libya, Morocco, Turkey, Ukraine) and beyond (Mauritania, Lebanon), the presence of an ever increasing number of zones of detention conceals policies and practices contrary to international commitments which some of these states are bound to (the United Nation Convention relating to the Status of Refugees, the International Convention on the Rights of the Child, etc.). In Cyprus, Greece, Italy, Malta, migrants are automatically placed in detention, whatever their humanitarian and/or legal situation is, including those rescued or intercepted at sea after long journeys.

Whatever name we may give them [1], these camps for foreigners have become a prized tool to manage migrant populations. People are detained without trial or sentence, in prison-like conditions, sometimes even confined in cells. Such detention sanctions those who did not respect laws relative to border crossing or length of stay in a country, though these can be contrary to international law, for instance in the case of the protection of refugees. In some cases, mistreatment and physical or psychological violence are commonplace. Frequent incidents (riots, hunger strikes, voluntary fire), with sometimes tragic consequences (suicides, deaths), serve to show how inappropriate the detention system is for the people it targets.

The proliferation of camps has come hand in hand with an increase in the length of detention, [2] which often exceeds the time required to organise deportations. Behind the official objectives stated (rationalisation of migration management), the institutionalization of the detention of migrants is part of a deterrence policy which criminalizes those considered undesirable. This policy, which runs contrary to democratic principles, comes with exorbitant costs: not only at a human level, but also with regards to the police and administrative forces it mobilizes, which it is estimated exceeds several billion Euros for EU member states. I [3]

Since 2002, the Migreurop network endeavors to document and denounce the consequences of the EU migration policies, first and foremost with regards to the confinement of migrants. [4] In 2004, its members called for a collective action against the creation of camps at the borders of Europe. [5] Since then, numerous reports have been issued by UN agencies, by the CPT (European Committee for the Prevention of Torture), by the Council of Europe Commissioner for Human Rights, by parliamentary missions, by international organizations or NGOs. The reports and field observations all conclude that the detention of migrants leads by its very nature to the violation of human rights: in the first instance on the freedom of movement, but also a right to asylum, the right of respect for private and family life, the right to protection against inhuman or degrading treatments, or rights specific to vulnerable people such as children. In 2007, a report solicited by the European Parliament stated that: “The deprivation of freedom and the conditions in detention centres create or aggravate psychological or psychiatric disorders. (...) Depriving children of their freedom can however have a particularly harmful impact on these children and lead to the onset of psychological disorders in the short or long-term”. [6]

Very often, no effective judicial control is exercised in practice with regards to confinement, although infringement of individual liberties are at stake.

The large-scale confinement of migrants which has been developed in the framework of European asylum and immigration policy proves to be ineffective in relation to its supposed objectives of “controlling migration flows”. It is incongruous to attempt to resolve the issue of so-called “irregular” migration from a security angle. Participating to the stigmatization of migrants as “guilty”, and propagating the idea that to exercising one’s right to circulate freely is a crime, it is at the roots of recurrent violations of human rights and serves to feed racism and xenophobia.

Migreurop demands that governments of EU member states and its neighboring countries to stop resorting to detention as a tool for controlling migration flows, and calls for civil society to oppose the system of detention of migrants.

Solemn call for freedom of movement

Since its creation, the Migreurop network has highlighted the harmful effects of the European Union’s border management policy [7]. It has regularly criticised the securitarian view of migration policies, which translates into a growing militarisation of Fortress Europe, the multiplication of interceptions at sea, or even the closure of possibilities to migrate legally (which translates into obstacles introduced for the issuing of visas) [8]. Migreurop points out the multiplication of controls, which call upon sophisticated and expensive methods, as is demonstrated by the building of new walls and first the creation and then the strengthening of the Frontex agency – the European Union’s veritable armed wing.

Likewise, Migreurop criticises the process of externalisation of migration controls that force third countries to readmit anyone who is chased away from European countries who is believed to have passed through their territory and to strengthen control and repression to prevent the departure and transit of migrants. In this way, there is a proliferation of readmission agreements, which seek to enable expulsions and constitute one of the weapons to prevent the mobility of migrants upstream from the European borders [9]. The EU does not hesitate to use Public Development Aid instrumentally, to pressure migrants’ transit and home countries in order for them to accept such agreements. Through these mechanisms, Europe turns away from its duty to protect people who seek asylum and it ignores the human rights violations that this entails.

In 2010, Migreurop took a stand for the closing of camps for foreigners, the instrument of choice for the management of migrant populations [10]. Migrants, detained or otherwise, are considered criminals and declared to be in an illegal situation only because they have supposedly not complied with the rules imposed for the crossing of borders and the right of residence. Contravening these rules - although they sometimes run contrary to international law - serves to justify increasingly strict policies to restrict people from coming and going, while nobody can ignore their frightening consequences : since 1990, over 20,000 people have died or disappeared while they tried to reach Europe.

Through these struggles that Migreurop has undertaken, we have highlighted the harmful effects of obstacles placed in the way of people’s freedom of movement. Yet, this freedom exists for a part of the world’s citizens who, by chance resulting from their place of birth, have a passport or obtain visas without difficulty that allow them to easily cross borders. Accepting that others should be denied this means approving the existence of a world with two tracks, entailing discriminations based on a relationship of political-economic domination by the so-called industrialised countries over the others. It also means ignoring the existence of fundamental rights, such as the right to migrate, which is recognised by the Universal Declaration of Human Rights, or the non-refoulement principle that is sanctioned by the 1951 Geneva Convention.

Claiming the right to come, to go and to settle for everyone, woman or man, in the name of the principle of equality constitutes an indispensable corollary to the defence of the rights of migrants. This is why, in continuity with its activities and struggles, Migreurop demands the effective implementation of freedom of movement, as a means for social change for the sake of a fairer and more equitable model of society. 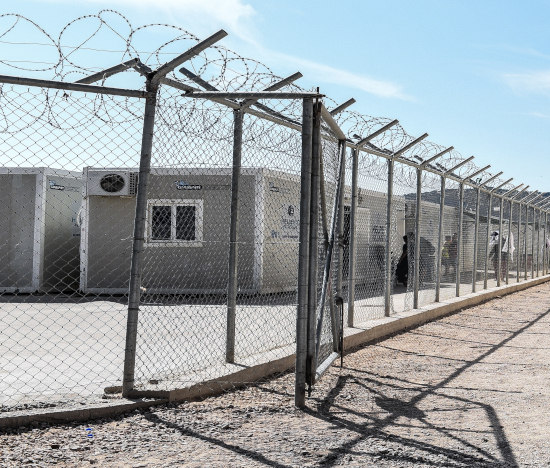 [1] The camps we refer to include « closed camps » or « centri di identificazione ed epulsione », but also of « waiting zones », « transit centers », even « reception centers ».

[2] The « return directive” adopted by the European Council in December 2008 allows for detention stretching up to 18 months.

[6] European Parliament, "The conditions in centres for third country nationals (detention camps, open centres as well as transit centres and transit zones) with a particular focus on provisions and facilities for persons with special needs in the 25 EU member states ", IP/C/LIBE/IC/2006-181, dec. 2007

[8] For example, through the Frontexit campaign, or the network’s complaints against the denial of visas to its non-European members, or also when Migreurop demands access to European territory for people who are intercepted at sea, in the name of the right to seek asylum or of the principle non-refoulement towards countries where there is a risk of inhumane and degrading treatment.