On the occasion of the European Social Forum on Migration, Migreurop and Casa da gente de Barcelona organise a webinar on 11 March from 3pm to 5 pm (GMT+1) on the militarisation of borders and the criminalisation of solidarity ("human rights and migration" axis) with the participation of Chris Jones (Statewatch/Migreurop), Claudia Charles (Gisti/Migreurop), Chloé Portais (Borderline Europe) and Juliana Wahlgren (European network against racism-ENAR).

The presentation of migration as a "risk" and then as a "threat" has, for nearly 30 years, legitimised increasingly security-oriented and repressive policies towards people on the move, and their supports, within the EU, at its borders and beyond. Thus, more and more numerous and sophisticated obstacles are being erected at each stage of the route to repel migrants and secure European borders (naval operations, army deployment, drones and satellites, biometrics)

The European Union is waging a veritable war against people on the move with the aim of hindering their mobility and preventing them from reaching the continent. The EU is mobilising military, administrative and criminal means, in disregard of their rights, which it must guarantee (right of asylum, right not to be subjected to inhuman and degrading treatment, right to a fair trial and effective remedy, etc.).

In recent years, this military arsenal has been supplemented by deterrence and the muzzling of solidarity. The political discourse that opportunely associates people on the move with the ills of our societies, to make them not only scapegoats but also "criminals", has multiplied and trivialised, justifying these all-out attacks against solidarity.

This solidarity, whether expressed by associations or individuals, in Europe and elsewhere, is in the line of fire of the governments of the Member States. On all sides, it is a matter of muzzling the voices of those who speak out in resistance. This repression does not spare, far from it, solidarity when it emanates from the migrants themselves. In this case, prosecutions, sanctions and intimidation are all the more severe as migrants are in an even more vulnerable situation, sometimes without a right to residence, access to legal assistance or knowledge of the language.

This workshop aims to show the extent of the phenomenon and its consequences, particularly with regard to civil society. 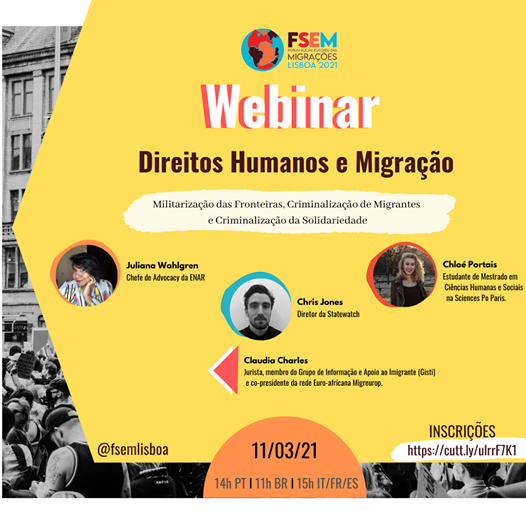 Webinar on zoom (with translations into French, English, Spanish) and broadcast in FB live (without translations)

Sign in to the ESFM activities from 15 to 26 March 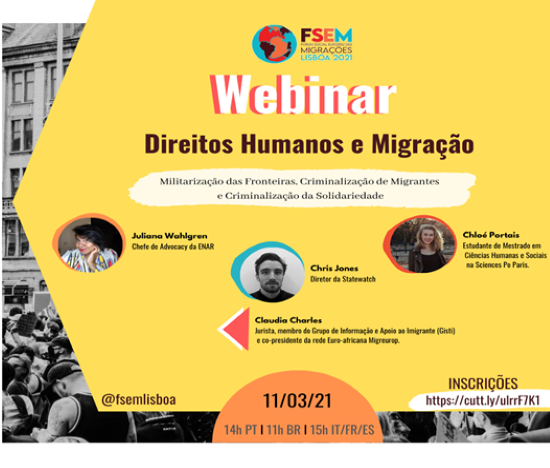