The report of Migreurop “Locked up and excluded": Informal and illegal detention in Spain, Greece, Italy and Germany” looks back at how four EU member states practiced the administrative detention of non- nationals in 2019. The report shows how, in both first arrival countries such as Italy, Greece and Spain and in a presumed destination country, Germany, the detention of non-nationals is evolving, taking new forms and based on new grounds. In particular, this report argues that, in 2019, administrative detention was increasingly happening outside or at the margins of existing legal frameworks. We consider that locking migrants up without respecting or by bending existing legislations amounted to a generalization of ad hoc and informal detention and that it led to the further precarisation and deterioration of detention conditions.

The recent release of the New Pact on Migration and Asylum has triggered debates about whether this proposal by the European Commission will improve the situation of migrants and asylum seekers and the way migration is governed in the EU. This report shows that many of the practices proposed in the Pact are in fact already been taking place in member states and that they are harmful for migrants and asylum seekers.

The way detention is evolving in different member states is not homogenous across EU territory. The form, modalities and grounds taken by administrative detention depend on national contexts and on the geographic position of each member state in the EU border regime. The Migreurop network has long argued that the EU has developed a regime of migration and border governance that is premised on an unequal sharing of control duties within and outside the EU territory, with peripheral member states tasked to filter unwanted mobilities on behalf of their northern and western counterparts. Within this system, the twin practices of detention and deportation have been playing a key role.

(...) Read more in the Executive Summary available in english.

This study was carried out with the support of the European United Left (GUE/NGL) in the European Parliament. 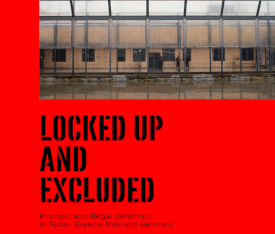