On Friday 28th February 2020, Turkish President Recep Tayyip Erdogan decided unilaterally to suspend the EU-Turkey deal of 2016, which, over the past four years, transformed five Greek islands in the Aegean sea into open prisons for migrants, the infamous ‘hotspots’. Already, Turkey had repeatedly used this agreement as a blackmailing device, threatening to re-open its borders with the EU. Finally, this threat was carried out in response to criticism from European leaders following a Turkish invasion of Syria and the loss of thirty Turkish soldiers in a Russian bombing. Following this, thousands of exiles, most of them traveling in buses chartered by the Turkish authorities, rushed to the land and sea borders, facing heavy violence from the police and Greek army which had been deployed immediately to prevent people crossing the border.

Under the guise of ‘protecting Europe’s borders’, [1] the Greece-Turkey border has become the scene of numerous human rights violations, including gross violations of personal dignity, physical integrity, and the right to life. Violence at the land and sea borders has reached a peak. [2] By refusing entry to European territory for people seeking asylum, and by suspending the registration of asylum requests, Greece, with the support of the EU which sent the European Frontex agency as reinforcement, rides roughshod over the principle of non-refoulement, cornerstone of the Geneva Convention. As noted by the United Nations Special Rapporteur on extrajudicial executions, denouncing "a situation of absolute lawlessness", "Greece plays a role as cruel as that played by Turkey or the rest of the European states, because the crisis is (...) rooted in the lack of vision and courage of European leaders”. [3]

Since March 2020, a new catastrophe has struck the Greek hotspots. In addition to the intolerable overcrowding, lack of food and sanitary infrastructures (drinking water, showers, toilets), inadequate accommodation in tents (which has resulted in several deaths each year due to hypothermia), and to the frequent fires which ravage the island camps, the threat of Covid-19 has been added to this deadly mix. On 22nd March 2020, Greek authorities announced mandatory confinement of people living in migrant camps, including the hotspots. Given that levels of overcrowding make preventing spread of the virus virtually impossible in these sites, such measures can only serve to deliberately expose camp residents to a serious and imminent threat of infection. [4]

This report exposes the humanitarian crisis and situation of lawlessness which already existed for people seeking asylum trapped on Samos at the end of 2019, thus pre-dating the collapse of the EU-Turkey deal and Covid-19 pandemic. At the time of publication, the present reality serves only to reaffirm how the ‘hotspot approach’, feted by the European Commission as the solution to putting an end to the so-called ‘migrant crisis’, has instead ‘created a monster’. [5]

See also the hotspots page on the website of the Gisti (FR). 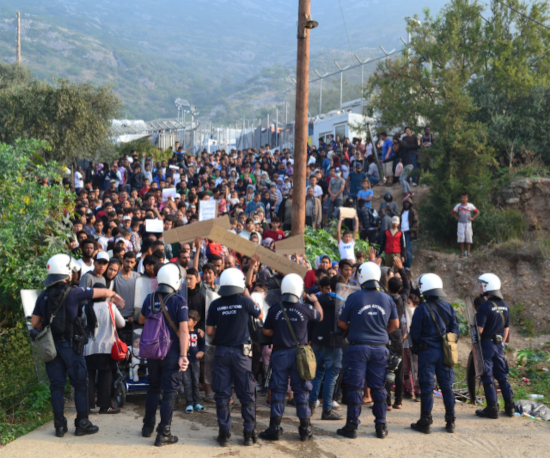 [2] Videos on the situation of violence against exiles at the Greek-Turkish border.

[4] Migreurop, 3rd April 2020, « From the « war against the virus » to the war against exiles: security responses to Covid-19 exacerbate violence at borders.